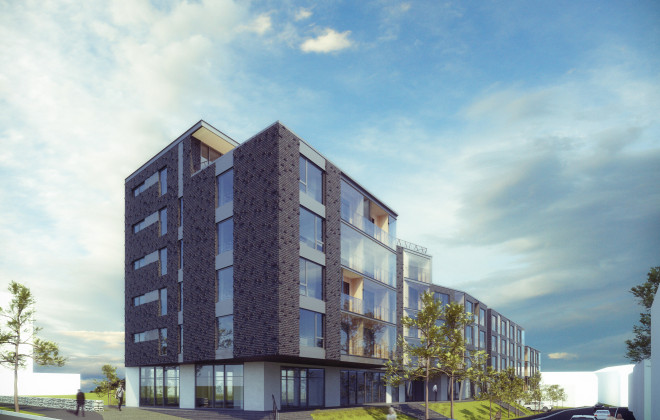 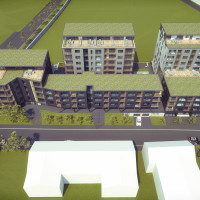 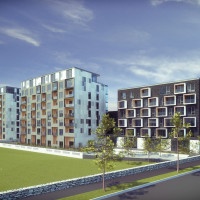 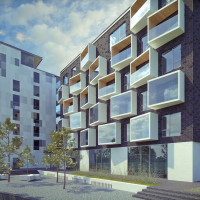 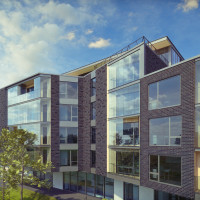 The area which the competition addresses is situated inquite a visible location and will have a signifiant effecton the design and organization of urban space.In order to achieve an appropriate urban planning solution, the heights of the buildings fall in two groups: the4-storey volume along Toom-Kuninga Street beside thevolume reaching 9 flors closer to the stadium. The 4-storey volume matches the existing buildings in Toom-Kuninga Street, and, similarly, the higher volume interactswith the building of the Ministry of Finance; together,these defie the stadium area between the two highervolumes more precisely.As far as functions are concerned, the buildings fallinto three types. The lowest level is occupied by parking. Above the parking garage, there are commercialspaces; and residential areas that require more privacyare, in their turn, on the level above the latter. Consequently, tiered buildings create several “street” planes. The fist and the most immediate one is the planeof Toom-Kuninga Street. It gives access to the parkinggarage under the building, and it is directly visible onthe eye level. The second plane, the “business street”,emerges over the parking flor and comprises thecommercial spaces directed at the public. This planeis easily accessible for anyone. The third street plane isformed by roof terraces which are the opposite of thepublic “business street”.The idea of the suggested architectural solution lies indiversifying the buildings without making excessive noise, in creating a dialogue of various façades with thesurroundings. Lower building parts are faced with darkbrick, and higher building volumes, with light façadeplates.