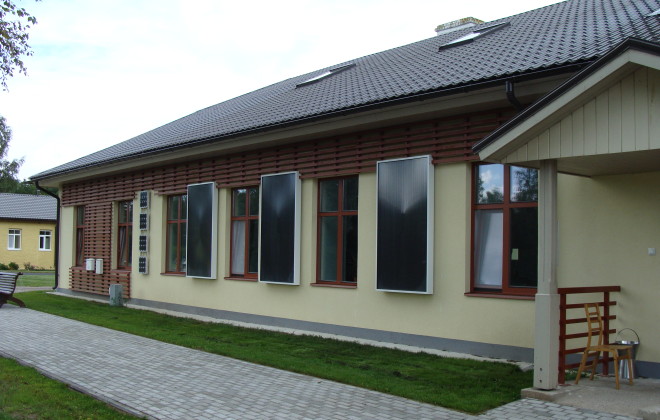 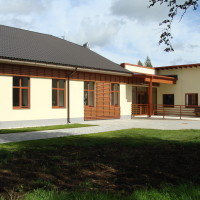 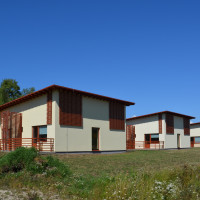 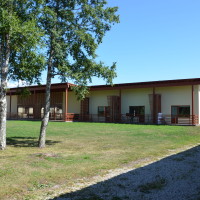 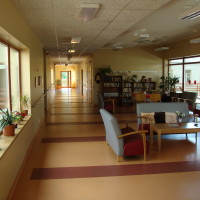 The building is one-storey high. The new volume of the building is linked to the existing one through a gallery. People with special needs are located right next to the gallery.There are separate rooms for two people with living anddining rooms. In this ward there are also toilets and washing facilities for handicapped people. Special procedurerooms and massage spaces are located in the meetingpoint of the two houses (the existing and the new one). There are also rest rooms, toilet facilities, storages and washingrooms for the staff. In the extension the rooms are locatedin the protruding parts that have 4 single or double rooms.The rooms for the use of two have their own private toiletfacilities nearby, the single rooms have one toilet per tworooms. There are spacious living rooms in the meeting pointsof the protruding rooms. There is a separate access fromeach living room to a large joint terrace. All the rooms haveseparate terraces.In the planning of the new extension the movement ofdaylight and sunlight has been considered. The aim is to letas much sunlight and daylight as possible indoors. All therooms are planned so that they receive daylight 3 h eachday at the minimum. The living rooms have large screenwindows on both sides, thus avoiding any narrow and darkpassages. All the corridors have windows in the end walls.The façade of the building is simple, the main concept is awide overhanging roof providing various movement on thewalls. The building is plastered in lighter tones emphasisingwood elements.