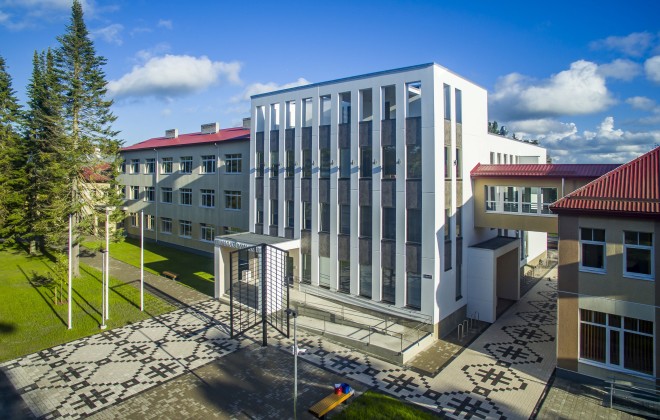 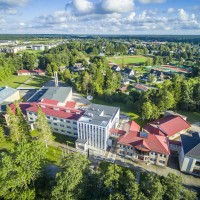 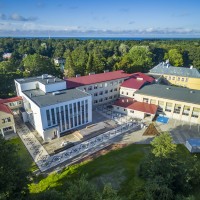 The building of the state gymnasium on Hiiumaa is designed as an extension of the existing Kärdla basic education school. The building volume is primarily based onthe building’s functionality: the objective lay in ensuringan optimum compact spatial solution that would alsobe spacious.Instead of the existing stairwell, a new stairwell will beconstructed which will clearly divide the school into twoblocks: the administrative block will be in the northernpart, and the southern part will contain classrooms. Theplan of the ground flor includes a large music classroom and a tiered lecture hall. The general area of theground flor comprises the recreation area which ex-pands into the outdoor space – the terrace and yardaround the eastern and southern sides of the building.The other two flors contain classrooms. The attic is fited with a lightwell, which makes the recreation seemmore spacious in addition to providing extra daylight.The attic flor also has two different planes: there is aterrace balcony partially covered with the awning andbordered with a decorative façade at the front of thebuilding and an open roof terrace in the southern part.Both provide plenty of opportunities for studies and recreation.The architectural concept implies that the state gymnasium is to be a building volume clearly discernible fromthe existing complex of buildings. The building extendsforward from the volume of the basic education school to the same line of construction as the counsellingcenter. Classical methods create an elegant façade,to which playfulness is added by means of modernawnings. Wooden fiishing of the interior surface addswarmth to the stern white exterior of the awnings. Vertical façade elements are inspired by the façades ofthe gym and the nearby buildings. White plastered stripes are the main component of the façade. The texture of the plaster matches the existing one, and the white paint highlights the building among the others andadds brightness. Greyish façade plates with perforatedKärdla knitted mitten pattern are fited in the verticalspaces between the windows for the sake of emphasis.This is the way the idea of the site plan is implemented inthe façade. The lighting behind façade plates createsa fascinating play of light in the dark.