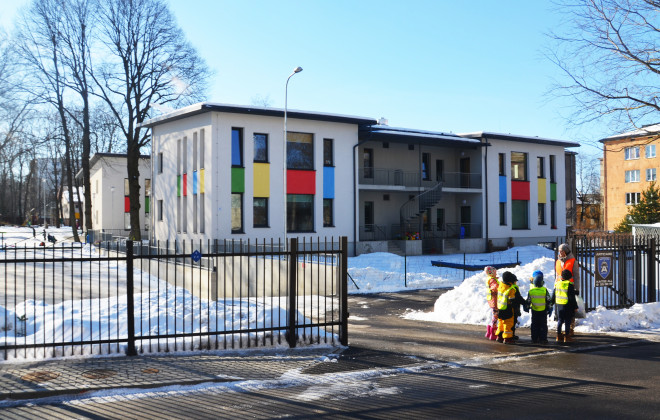 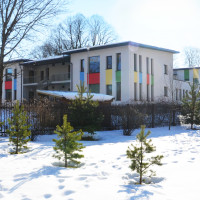 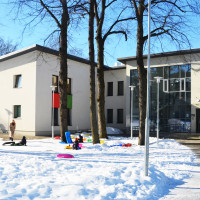 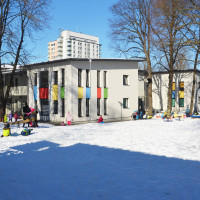 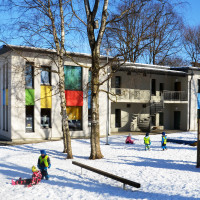 The reconstruction project of the kinder¬garten deals with the replacement of the old utilized housing for a new space for children in different age groups. Instead of the current 5 groups of children there will be altogether 8 new premises for groups. In the housing there will be 8 group rooms that have similar layout and flor plan. The main entrance is in the mid¬dle of the house in the east with an access to other parts of the building. In general the building will ac¬commodate 160 children of different age groups. The dominating fiishing material to be used is concrete. There is an in¬ner courtyard where children can play in the mornings with direct sunlight before noon. There are additional exits from all the group rooms from the sides of the build¬ing. The building is two storeys high and there is an additional emergency es¬cape spiral stairway from the upper flor. The project has been ordered by the Estonian Board of Education. The maximum construction area for the housing is 1000,7 m2. On the basement flor there is a boiler room, technical rooms and a kitchen. On the up¬per flors there are washing rooms, toi¬let facilities, group rooms, storages, a gym, a health care room, staff rooms, a meeting room, a music room, sleeping rooms and a special room for educational specialists.